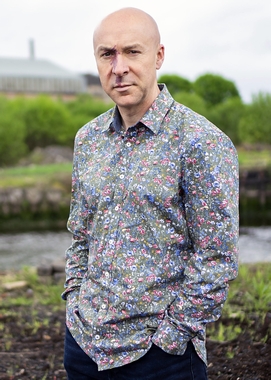 Chris Brookmyre was a journalist before becoming a full-time novelist with the publication of his award-winning debut Quite Ugly One Morning, which established him as one of Britain’s leading crime writers. His 2016 novel Black Widow won both the McIlvanney Prize and the Theakston Old Peculier Crime Novel of the Year award. Brookmyre’s novels have sold more than two million copies in the UK alone.

Quite Ugly One Morning was the winner of the Critics’ First Blood Award for Best First Crime Novel of the Year in 1996.

Boiling a Frog won the Sherlock Award for Best Comic Detective Novel in 2000 and Christopher became the only writer to win two Sherlocks when Be My Enemy picked up the 2004 prize.

In 2007, Christopher was given the Glenfiddich Spirit of Scotland Award for Writing.

Christopher has been shortlisted three times for the Theakstons Old Peculier Crime Novel of the Year Award: in 2007 for All Fun And Games Until Somebody Loses An Eye, in 2008 for A Tale Etched in Blood and Hard Black Pencil and in 2012 for Where The Bodies Are Buried.